Emma & Perry chose a couple of great choices for their first songs. The first I hadn’t heard since watching the Labyrinth as a child ‘As The World Falls Down’  by David Bowie. A really unusual but lovely choice. We then linked this half way through into ‘Born To Hand Jive‘ which was certainly a lot of fun! 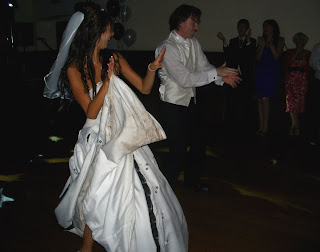 Emma had already had some dance experience as a child so she was relatively confident with some basic moves. The groom made up in boundless energy and enthusiasm in anything he may have lacked in experience – I ‘m sure he has certainly strutted his funky stuff on the dance floor a good few times!

We started with the David Bowie song. Contrary to what couples think it is often a lot harder the slower the song. This was a mid tempo for a slow number but it took a little while initially to get the hang of some of the more traditional ballroom steps. We spiced it up with a few fancy steps too and Emma surprised herself with a fabulous back-bend in Perry’s arms! By the end of the first session this song was done. The couple couldn’t resist showing me their ideas and a few of their ‘signature moves’ for the rock and roll number though before I left! I could tell we would be having fun next time! 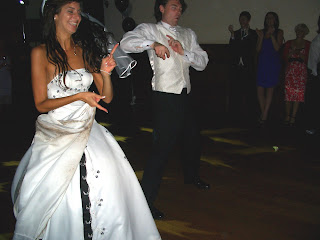 The next session was a glorious summer’s evening so we thought we’d make the most of it and move to the garden. We seemed to race through this number – it seemed to choreograph itself! Perry was full of ideas and even wanted to use a prop – a comb to pull out of his jacket and pose with doing his hair half way through! We found enough time to go back to the first dance and even added a lift now we had the outside space.

They complimented each other well in the way they danced – Emma’s experience and good timing pulled back Perry’s over excitement at times and they would chat through the routine to remind each other of what was coming next. This is something I encourage in wedding dances. Of course in strict ballroom competition chatting would be no go, but there is no Craig Revel Horwood holding up the scorecard from the bar for a first dance! It is lovely to see a couple interacting as they dance socially.

The last session we had an hour to tweak odd bits and just generally polish the routine, which should have been smooth sailing. Instead, the bride had had a dress fitting and found out she couldn’t move backwards in the dress! We began to adapt a few of the steps to make sure she always moved forwards, then the heavens opened so we had to race inside!  Fortunately it was only the first routine that needed the main changes and just a few steps so it didn’t take too long. We managed to run the whole finalised routine around 5 times before I left.

Emma and Perry told me afterwards that it all went perfectly to plan!  Do check out the video they sent me (above)! I was so proud of them and it looked like everyone loved it including the couple!

One Response to Emma and Perry’s first dance